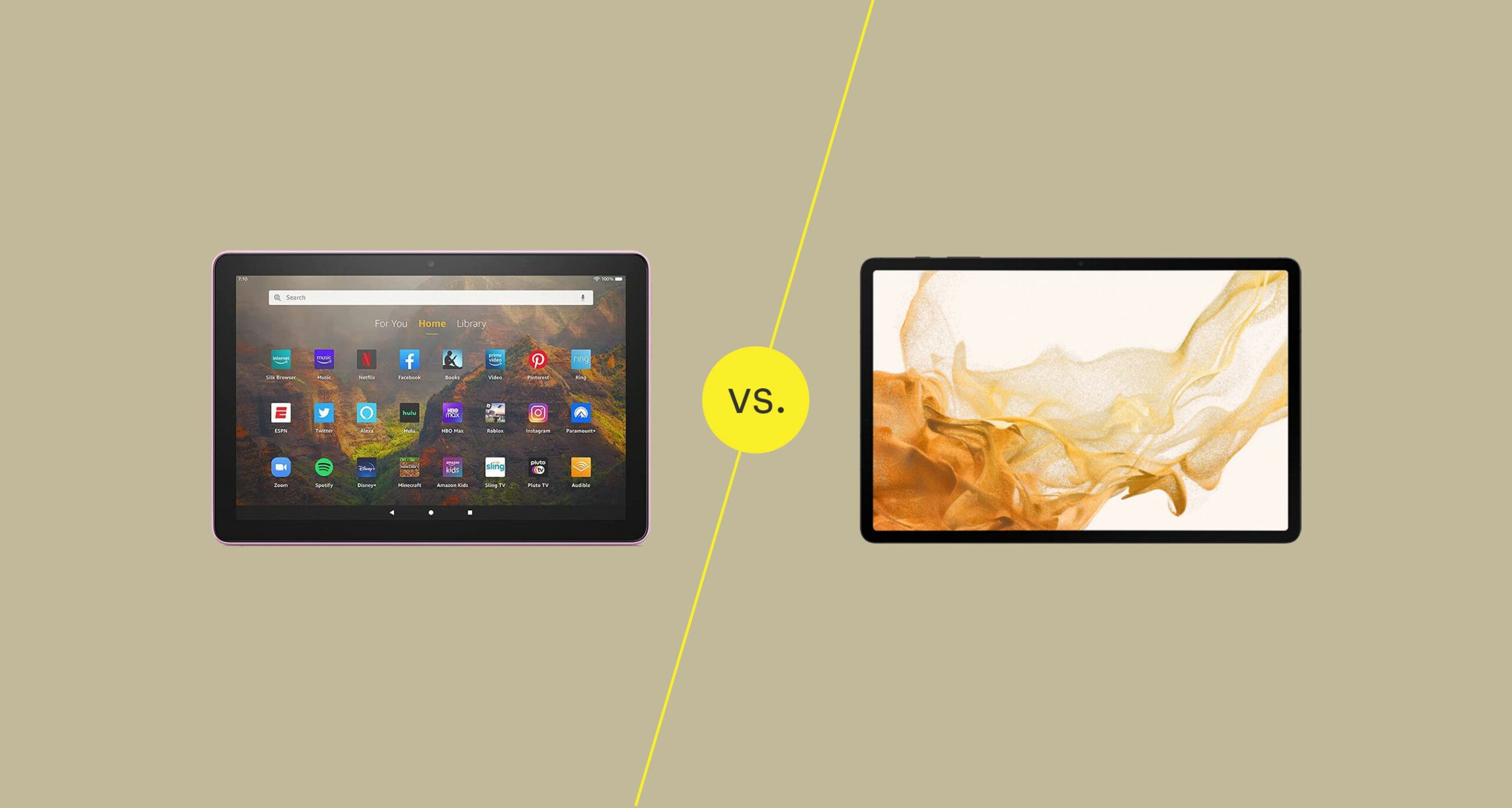 Choose the best for you!

Samsung tablets and Amazon Fire Tablets look the same and share many similar features and apps, but there are unique variations between the two tablet makers. People mostly get confused while differentiating those. To assist you in clarifying which tablet best suits your needs, we have compared Samsung tablets and Amazon Fire tablets to determine which one suits your needs well!

Amazon and Samsung both brands make several models and sizes of tablets. The Amazon Fire Tablets, originally known as Kindle Fire, are excellent e-readers. Except for fewer minor exceptions, they can efficiently do nearly anything Samsung tablets are capable of doing, but the main difference between them is their display.

Samsung manufactures a wide selection of tablets with different display features and performance levels. But with the same specs, Amazon Fire HD beats the Galaxy A8 in terms of performance and is also less costly. Let’s differentiate more!

The primary difference between the Amazon Fire and Samsung tablet is their operating system. Samsung smart devices such as smartphones and tablets run on Google Android, while the Amazon Fire tablet’s working is based on the Fire OS.

Google play store is accessible to Samsung customers for downloading android applications. Also, Samsung has its own play store for exclusive apps for Samsung devices.

Customers of Amazon Fire tablets in Pakistan are bound to use the device’s app store, but you can still add the Google app store to your Fire tablets. Samsung tablets offer more feasibility in that case if you want some more specific apps to use as Samsung cares for the user’s preference really well. The Fire tablet has its own specifications, like an e-reader. Although the Kindle app is available for all android devices, including Samsung, Amazon Fire is specifically designed for reading books aloud.

Performance: Samsung Offers More While Fire Is for Consuming Media

Although the processors used in the Samsung tablets and Amazon Fire devices are almost similar but are designed for different purposes. Amazon Fire tablets in Pakistan are mainly intended for reading, watching videos and listening to your favourite music. On the other hand, Samsung is capable of doing anything literally with all the functionality and maximum level. There are also higher-level Samsung models optimised for higher productivity and games.

Samsung tablets are more expensive than Amazon Fire tablets, but they can do more than what Amazon Fire tablets can do. On the other hand, the Fire HD is significantly speedier than the same-priced Galaxy tab A8. In terms of battery, Samsung devices often outlast their Amazon rivals. Samsung’s battery lasts longer than 12 hours, while the Amazon Fire one lasts approximately 8 to 10 hours.

When looking for tablets, paying detailed attention to the RAM and the internal storage really matters the most. The former defines how many programmes and applications you can run on your device, whereas the latter determines how many applications it can easily hold. Most Samsung and Android tablets offer microSD slots for additional storage.

Generally, Samsung tablets have better quality cameras, while Amazon Fire tablets have been continuously improving their camera quality, but they have to come more. Both brands offer Wi-Fi, Bluetooth and USB connectivity, while only Samsung Galaxy tabs are 5G enabled.

Final Verdict: Mostly a Personal Preference, but Both Have Their Benefits

Both Samsung and Amazon manufacture tablets in different low to high price ranges and have several types, so it is essential to examine and analyse their technical specifications, which are well fitted to your needs.

The foremost important consideration is your preference about the operating system, whether you want to use Fire OS or Android. Opting for a Samsung tablet will make things easier if you’ve already used Google assistant and Android. If you are more familiar with the Kindle e-readers and Alexa, you might prefer the Fire Tablet.

So which one made you scratch your head? Discount Store has it all for you, no matter which one you prefer!

Buy Samsung tablets online at the best price in Pakistan at Discount Store’s website now! We are the largest stockist of tablets in Pakistan with different specifications and price ranges. Order now!